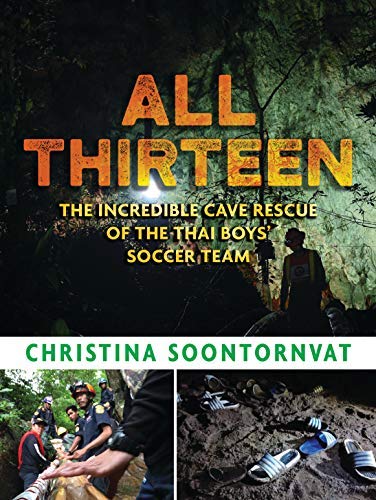 Summary:  In the summer of 2018, the entire world watched as rescue teams struggled to save the twelve members of the Wild Boars soccer team and their coach who were stuck inside the flooded Tham Luang Nang Non cave in Thailand.  This book tells the story from the beginning, when this close-knit group of boys ranging in age from 11 to 16, and their 25-year-old coach decided to take a trip to the cave one day after practice.  After the cave unexpectedly flooded, an international team of cavers and divers were called in to figure out the best rescue strategy: pump out the water, drill into the side of the cave, or dive and swim the team out.  In the end, the dive and swim strategy was used, and as the story unfolds, the reader finds out it was nothing short of a miracle that all thirteen were rescued (although a Thai Navy SEAL died delivering oxygen tanks a couple days before the rescue procedure began).  Sidebars give more information about Thailand, caves, and Buddhism (the coach spent much of his life in Buddhist monasteries, and his teachings on meditation helped everyone stay calm inside the cave).  Includes an author’s note that tells of her connection to the story (she was visiting family in Thailand during the rescue); extensive source notes, a bibliography, and an index.  288 pages; grades 4-8.

Pros:  I didn’t think anything could compel me to read a 288-page book on my phone, but once I started reading this story, I couldn’t stop.  The boys and especially their coach are likeable from page 1, and the rescuers endure hunger, sleep deprivation, and what sounded like a really disgusting foot fungus condition to accomplish something that seemed impossible from beginning to end.  The numerous photos draw the reader in, and the sidebars add to the content, and remind me that I’d really like to visit Thailand someday.

One thought on “All Thirteen: The Incredible Cave Rescue of the Thai Boys’ Soccer Team by Christina Soontornvat”