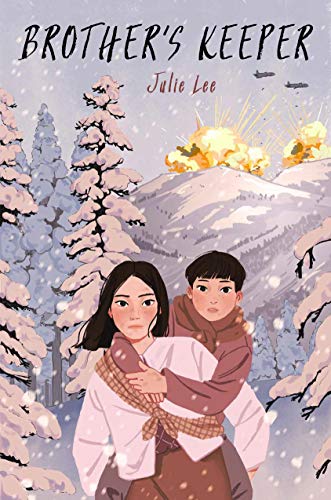 Summary:  12-year-old Sora lives under the oppressive Communist regime of 1950 North Korea, and the stiflingly low expectations for girls in her traditional Korean family.  When war breaks out between North and South Korea, her father wants to escape to the south, while her mother is sure they won’t survive.  When it finally becomes clear that their lives are in danger at home, the family leaves, racing the Red army through the cold winter weather.  A bombing separates Sora and her 8-year-old brother from their parents and 2-year-old brother, and the two must travel alone, hoping to reunite with the rest of the family at their uncle’s house in Busan on the southern coast.  Sickness, hunger, predatory strangers, and other harrowing obstacles make this a page-turning survival story.  Includes a lengthy author’s note with additional information and photos on whom Sora is based; a glossary of Korean words; and a timeline of the Korean War.  320 pages; grades 4-7.

Pros:  Anyone laboring under the delusion that historical fiction is dull will be disabused of that notion after reading this book.  There is plenty of action and suspense.  Sora is a fascinating protagonist: she’s smart and dreams of a future as a teacher or writer, yet still wants her parents’ approval and tries to be a good daughter (which means giving up school to take care of her brothers).  There’s also lots of interesting information about the “Forgotten War” woven into the plot and in the back matter.

Cons:  Just when you think you’re heading for a happy ending…well, I don’t want to give too much away.

One thought on “Brother’s Keeper by Julie Lee”