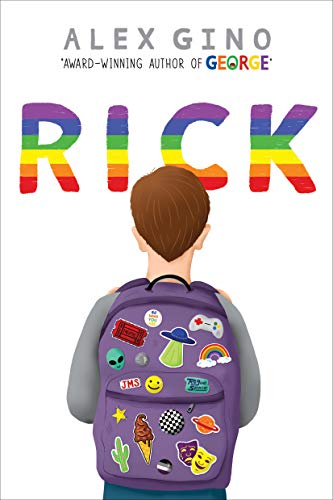 Summary:  Rick and his best friend Jeff (from Gino’s 2015 book George) take the center stage in this book as they start middle school.  Rick is starting to be more aware of the fact that Jeff is kind of a jerk, and also that kids around him are starting to be interested in dating.  Rick’s not sure if he’s straight or gay, since he doesn’t feel particularly attracted to either boys or girls.  Although he feels uncomfortable and worried that Jeff might find out, Rick attends a Rainbow Spectrum meeting for kids exploring their genders and sexualities.  When he learns about asexuality, he thinks that might be the right identity for him.  He finds support through new relationships with kids in the group and a closer bond with his grandfather who turns out to have some secrets of his own.  Rick’s newfound confidence helps him to stand up to Jeff and feel more comfortable about expressing himself in public.  240 pages; grades 4-7.

Pros:  Rick’s search for an identity he feels comfortable with feels like an authentic middle school experience.  The Rainbow Spectrum cast of characters provides a vehicle to introduce readers to different genders, sexualities, and pronouns.  Kids who have read George will enjoy catching up with the kids from that story a few years later, and will be happy to find out that George is entering middle school as Melissa.

Cons:  Like another book of Alex’s, You Don’t Know Everything, Jilly P., this one felt very agenda-driven.  Too often the characters tell instead of show, and appear unusually “woke” for middle school kids as young as 11, e.g., this from a sixth grade boy: “Rick, if we’re gonna be friends, you’ve got to share how you’re feeling.  Otherwise I’ll never know you.”