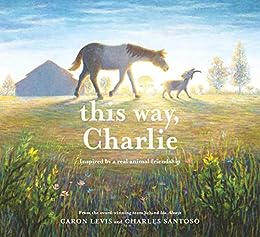 Summary:  Jack the goat keeps to himself, passing his days at Open Bud Ranch watching the other animals from a safe distance.  When Charlie the horse arrives, he ends up tripping right over Jack, which doesn’t make the goat too happy.  But he learns that Charlie is blind in one eye.  Charlie’s a friendly sort, but he has trouble getting around.  After watching him for a while, Jack gets up the courage to lead him to his favorite field to graze.  Jack never goes in the barn with Charlie and the other animals, having apparently suffered some kind of trauma in a barn before arriving at Open Bud.  Eventually, Charlie loses his vision completely and becomes more dependent on Jack.  Charlie tries to convince Jack that they should play with the other animals, but Jack refuses.  Then one day, Jack and Charlie get themselves into a dangerous situation, and it’s up to Jack to find a way out.  Can he overcome his fears to ask the other animals for help?   Includes an author’s note about the real-life inspiration for this story.  40 pages; ages 4-8.

Pros:  From the team that brought you  Ida, Always comes another based-on-a-true-story tale of animal friendship with super cute illustrations.  Pretty irresistible.

Cons:  I would have liked to have learned more about the true story…maybe with some photos?