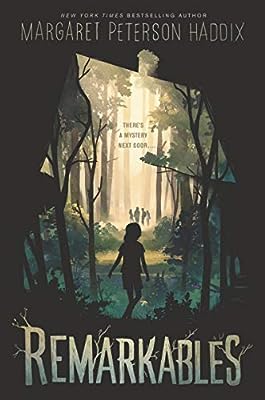 Summary:  Marin’s family is dealing with a move from Illinois to Pennsylvania and a new baby in the family; Marin’s also grieving over the loss of her two best friends after a fight right before the move.  Exploring the woods behind her new house one day, Marin sees a group of teenagers and watches them have fun together until they abruptly disappear. A few days later she meets Charley, an unfriendly neighborhood boy who reluctantly admits that he has seen the same group of teens.  He calls them the Remarkables, and he eventually reveals his connection to them. He believes they’re time travelers from the past; he’s pretty sure one of the boys is his father, whose drug addiction was fueled by guilt over having inadvertently caused the death of one of the girls. The transitions in Marin’s life becoming interwoven with the events of two decades ago as she and Charley try to figure out if they can change the past without upsetting the present and the future. 304 pages; grades 4-7.

Pros:  While there’s a touch of the supernatural here, Margaret Peterson Haddix moves away from her usual science fiction to focus more on family relationships and friendships.  The different strands of the story hum along at a pace that will keep readers turning the pages to find out how everything is resolved.  The happy ending celebrates friends and family with all their imperfections.